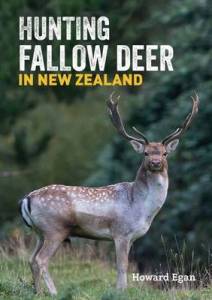 Upon picking up Hunting Fallow Deer in New Zealand: The Fallow Deer Herd by Howard Egan the first thing that strikes you is the many colour photos. It takes a few minutes to thumb through these images and you soon understand that this book has been put together by someone with a true passion for fallow deer.

From the outset, it is worth pointing out that it is not solely a guide book on hunting fallow deer, as I had assumed based on the title and cover page, but rather Howard’s reflections, personal experiences and observations over his hunting and farming career of fallow deer.

There are 10 chapters in total which are interspersed with short stories of hunts for fallow deer and the like. The chapters are:

These are the exact chapter titles, in their order.

This book feels like it comes from Howard’s heart and is written in a colloquial and conversational style — it is certainly not reminiscent of the average ‘how-to’ guide or reference book. I’m not quite sure how I feel about the style, but I think it may be divisive, appealing to some readers and not to others (especially when reading terms like “boyzone”, in Howard’s vernacular, to define bachelor groups of bucks).

It is written with a degree of assumed hunting knowledge on the part of the reader. So in order to get the most out of this book if your intention is for it to be a how-to-guide then you should consider reading some other introductory books first to get a grasp on the hunting basics and terminology. For example, you might like to read The Modern Hunter (2014) by Graeme Marshell & Don MacDonald or any one of Roger Lentle & Frank Saxton’s informative guide books: Stalking the Seasons Round: A Year-round Guide to Hunting Deer in New Zealand (1993), Red Deer in New Zealand: A Complete Hunting Guide (1991), New Zealand Hunter’s Companion (1996) and Alpine Hunting in New Zealand (1994).

My only real gripe is the lack of a map of New Zealand showing the locations of the current herds. Such a map would have been a useful aid to the reader.

Other additions which would have made this book helpful to prospective stalkers are specific details and summaries about gaining access to hunting the herds, for example, the Blue Mountains requires drawing a ballot (but you can often just call DOC the week before) and you can book accommodation from the Otago NZDA Branch at their Beaumont Lodge, or noting that the Greenstone and Caples herds have closed seasons and designated blocks. I can only assume that Howard did not want to make it too easy for hunters, a well known trait of old deerstalkers.

Overall, this is a good book about a deer species that is becoming more common around New Zealand (owing to releases) but not widely written about in New Zealand’s body of hunting literature. It will be of interest and benefit to those seeking to hunt fallow deer because Howard provides good insights, tips and tricks.

Other books about fallow deer hunting which may be of interest are The Fallow Deer: Dama dama (2003) by D. Bruce Banwell and Fallow Deer Hunting in New Zealand (1992) by Bob Pittaway.

Howard has also written Son of the Mist: The Hunting Career of Howard Egan (2013).

Howard Egan — aka ‘Grandad’ on the popular Fishnhunt Forum — has been hunting fallow deer for six decades. In Hunting Fallow Deer in New Zealand he has gathered together hard-won knowledge from his years of experience to help hunters understand the species better, including the key differences between fallow deer and other deer, and how this can make their hunting more successful.
Egan covers the basics of fallow deer behaviour, where the herds are around the country, what terrain fallow prefer, the habits of bucks and does — by day and by season — and how this information can help the hunter. He also looks at some of the big fallow trophies of the past and today, his experiences farming fallow and, of course, includes some of his best hunting stories.
Howard Egan lives in the Wairarapa, where he farmed fallow deer for over ten years. His previous book was Son of the Mist (2013).

Chamois on a tahr ballot block hunt - too right. I lost the paper, scissors, rock off to my mate who took this nice 9" class buck. He was then well on his way to an alpine double. The buck came in hard on us, as it was early days in the chamois rut when we had our block.
Up valley towards the glaciers. A couple of chamois about in addition to tahr.
Bull tahr are such big animals and hunting them is addictive and challenging. It's great to see hunters will be directly involved in the government's management plan in 2021/22.
Finally got onto a mature bull tahr. Big bodied animals. Epic mane.
Glassing hard and loving my new Zeiss rangefinder binos.
Tahr block base camp. Running, and absolutely loving, the MIA Westlander II. It's a home away from home, but I didn't spend too much time there this trip.
Then you start to spot the bulls. Too big to hide in the tussock.
Tahr spike camp one, on the cold side.
Glassing for bull tahr. Rugged country.
Tahr camp in the snow.
Kea in the wilderness tahr block. We encountered more kea than tahr this week.
5 years ago today I was here looking for West Coast bull tahr. In two weeks time I'll be back for my first ever tahr ballot block trip not that far away. Super excited!