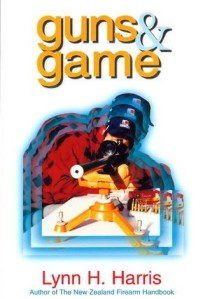 You often see secondhand copies of Guns & Game by Lynn Harris for sale and its odd cover page belies its quality content. Within its pages are some gems of information from a knowledgeable writer — a complete synopsis of Lynn’s contribution to the New Zealand’s hunting literature can be read below in the Publisher’s Blurb.

This book is best described as a compilation of historical articles written by Lynn. An extract from the introduction explains Lynn’s motivation for compiling this book when he notes its catalyst was an enquiry as to “whether I had any information on file about sambar deer in New Zealand.”

He goes on to say, “Not a lot has been written about the species for obvious reasons, but I remembered some serious historical research I had done early in my Government career into the animal’s introduction and liberation. I found the old Forest Service publication and was mightily surprised to note that it was published in 1966. Realising only too well that a whole new generation exists who have probably never had access to the old files, papers and magazines, and who had never heard of a certain old shooter and scribe, this book is the result.”

As alluded to, Lynn carried out a considerable amount of research, the result of which was a series of information booklets published on behalf of the New Zealand Forest Service (NZFS) and NZ Mountain Safely Council. Lynn also wrote A Hunting Guide: to Introduced Wild Animals of New Zealand (1973). The booklets he produced are as follows:

Some of that previously published information was used as the basis for this book, with the addition of some interesting new chapters about moose and axis deer (also known as chital). Sadly the herd of axis deer never established, but there are still some who believe that moose survive in New Zealand to this day.

About half of the book is about guns and ballistics (a couple of chapters are about gun crime) with the balance about hunting and deer.

Each chapter is standalone and because it is not a very large book it is ideal to tuck away in your rucksack to be read on a hunting trip.

The major downside to this publication, which Lynn acknowledges and dismisses as an issue, is that he did not update his articles for modern developments. That is, it is often in imperial measurements and uses ‘old-fashioned’ language. It was certainly the easy route to regurgitate/reprint old articles, but I think overall the book would have benefited from some revisions.

It is worth noting that his booklets are quite valuable if in good condition, so if  you happen across them, keep them somewhere safe as they are merely constructed of folded A4 paper, stapled along the spine.

It is a short book with a few illustrations and black & white photos. The book is somewhat academic in style, but includes some unique and insightful information from a knowledgeable author with valuable access to old government files which are no longer in existence today.  In summary, it is worth picking up a cheap copy of this book.

Since he obtained his first (legal) firearm, while a student at Hutt Valley High School, Lynn Harris has avidly pursued his interests of hunting, collecting, handloading, experimenting and writing about firearms and ammunition for about fifty years. Following a few early years in the retail gun trade, he was employed in the New Zealand Forest Service and spent over 20 years as its firearms adviser and training Government hunters.
Since the mid-1950s Lynn has produced a steady stream of firearm-related articles and publications. During the late 1950s he served as Shooting Editor of the N.Z. Outdoor magazine. In addition to producing authoritative publications for a number of Government agencies over many years, he also continued his private research interests resulting in a number of books and scholarly monographs, many of which are regarded internationally as standard references. He has established a worldwide reputation and has been rewarded with honorary life membership of a number of international collecting and research organisations. As a result of his expertise, especially in the area of small arms ammunition and related forensic matters, his assistance has often been sought by Government and law enforcement agencies.
Since his retirement as an Assistant Director of the New Zealand Wildlife Service, Lynn continues his wide interests in the shooting sports and always has a research project or two undergoing critical examination. Between these, he still enjoys time spent in the bush, sessions on the bench rest, and more tranquil, reflective periods on a trout stream.