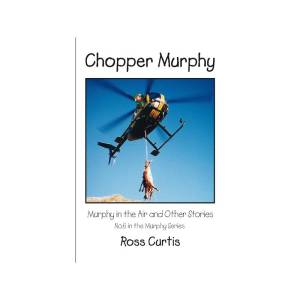 Chopper Murphy, Murphy in the Air and Other Stories, is the sixth book in Ross Curtis’ “Murphy Series”.

As with the preceding five books, Murphy, as in, ‘Murphy’s Law’, features regularly, personified by people or events which cause angst and consternation for Ross as he goes about the many tasks connected with hunting red deer.

Set in the Nelson and Tasman regions of the South Island, this book builds on previous titles recounting Ross’ experiences in the New Zealand Forest Service (NZFS), now known as the Department of Conservation.

The book focuses on Ross’ personal experiences in deer hunting and deer control, imparting his observations on the impact of utilising air based hunting on his district, starting with the introduction of fixed-wing planes to supply hunters via airdrop to ultimately using helicopters to access hunting grounds and harvest or cull deer.

Ross, a long serving ranger with NZFS, eventually became fed up with NZFS’ bureaucracy and false promises and so resigned and took up a job as forestry manger of Rabbit Island’s pine plantation in Nelson. At this point the book diverges from hunting and focuses on Ross’s management and “breaking-in” of pine forests, albeit in the hard-working-Curtis fashion we have come to expect.

Throughout the book Ross touches on his own flying experiences with fixed-wing planes — Cessnas, Austers, Piper Cubs and the like. Ross also writes about many memorable moments while flying with other pilots, providing interesting anecdotes about bush landings, near misses, supply drops and the pilots themselves.

The balance of the book is about Ross guiding his children in the back-country to secure their first red deer — it seems a Curtis family tradition to shoot a deer by age 12.

Two highlights in this book were Chapter 11, Disaster! A Helicopter Crashes, where Ross extinguishes a raging alpine fire sparked by a helicopter crash, and Chapter 19, NZDA Youth Training Trip, while teaching a group of young boys to hunt, Ross pulls off a masterful 500 metre shot using a .222 calibre rifle on a running chamois, perpetuating the Curtis hunting legend.

As always, Ross writes well and with a touch of humour and cheek.

Not a standalone book, Chopper Murphy is best read as part of the series. As a standalone book it doesn’t deliver enough hunting orientated material to satisfy the average hunting book reader but it will be of interest to those following Ross’ hunting career.

For those interested in the subject, there are many books that provide insights into hunting in New Zealand using helicopters, including Rex Forrester’s The Helicopter Hunters (1987) and The Chopper Boys (1983),  Hurricane Tim (2005) by Neville Peat, The Last Great Southern Adventure Helicopter Hunting, Fiordland (2011) by Olivia Page, and Chopper Chatter (2012) by Ken Tustin, to name just a few.

The Hunter’s recommendation is: borrow it (or buy it if you’ve read the earlier books in this series)

Ross Curtis shot his first deer at the age of eight, by the age of 12 he was keeping the family in meat by hunting and doing his schooling by correspondence. Not surprisingly deer and deer hunting continued to play a major part in his life.
Author of the highly successful books Murphy’s Law and The Hunter, Murphy On My Back, How I Met Murphy, Murphy Strikes Back and Ranger Murphy.
This book covers the latter years the author spent as a New Zealand Forest Service Ranger in North West Nelson, his interest in flying and how the arrival of the meat-hunters and their helicopter influenced his daily routine. Then a change to forestry and the stresses of the job relieved with family hunts – with Murphy always in close attendance.
Told with humour and a deep affection for the people places and events he describes. This book is filled with a wide variety of stories from numerous hunting trips both on the job and off, as well as anecdotes from every day life as a forest ranger and forestry officer. Inevitably Murphy has the last word.

Stag following a hind.
Young red stag.
An old doe chamois and her kid feeling safe on a rock ledge.
Saw a few chamois while after stags. Bucks aren't with the nannies yet.
And a mighty red from Nelson Lakes to finish off a great roar this year.
My 11pt red stag head is the result of a great week's deerstalking. Love being in New Zealand's backcountry. Love hunting. I hope everyone else had a roar to remember.
The new Zeiss RF binos helping to get the job done.
Getting roar ready for 10 days in the Southern Alps after stags and my new Zeiss rangefinder binos arrived in the nick of time today. I've been thinking of upgrading and the specs on the Victory RF 42s had me sold! I'll be packing all night to make the ferry tomorrow!
My NZDA membership card has arrived! Proud to be part of an organisation that works in the best interests of recreational hunters. I'm really enjoying my role working full time for hunters and helping make exciting changes, like all the discounts that come with NZDA membership this year.
In my spare time I'm helping save NZ's hunting history as a volunteer. Ever since I got involved with the NZDA National Heritage Trust a few years back it has been a full time job on top of a full time job! This is the end point of getting a majestic Fiordland Wapiti bull from the late Harrison collection onto the wall and displayed. It is one of the few 400" bulls ever to come out of Fiordland. The head is from the Pitt Valley. My good buddy @wattiesauce is the other main driving force behind this project. Check out @nzdanht to see more. The head was mounted by NZ Taxidermy and the awesome team out of Christchurch (NZDA members get a discount for mounts too!).
Tested myself and my 7mm08 rig in a 200m shoot today at the NZDA Wellington Branch rifle range, known as the Hong Tse. It was really good fun and the ultimate test of your shooting skills, without any aids or rest. Join a branch and get involved as it's great practice.
Two cleaned up chamois buck heads equals one happy hunter.