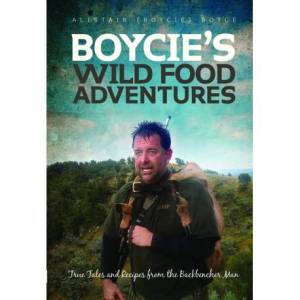 I think it should be stated from the outset that Boycie’s Wild Food Adventures is not a hunting book. By that I mean although its content is in part based around the acts of shooting deer, ducks and pigs (fishing also factors too), it does not deliver traditional hunting anecdotes and yarns that will satisfy the average reader, and certainly won’t satisfy those ‘purists’ out there.

The book’s long-title sums it up succinctly — Boycie’s Wild Food Adventures: True Tales and Recipes from the Backbencher Man.

Alistair Boyce is the chef and publican of Wellington’s famous Backbencher ‘gastro-pub’ near Parliament, and it’s his recipes which are found at the end of each short chapter that will be of most interest to readers — these are wild food recipes along with suggested wine and beer matches.

Alistair doesn’t profess to be a master hunter, rather he shoots wild game for the pot. In terms of the story element to each chapter, Alistair has written about a city slicker’s weekends away and day trips with his mates, with each chapter retelling a specific trip gathering wild foods. The stalk, adventure and back-country elements are not the crux of each chapter, rather it’s time in camp drinking beers (in Alistair’s case Steinlager), bbq’ing quantities of meat and hanging out with mates that are the focus of each tale. The hunts take place on farmland, usually by quadbike or 4×4, so these aren’t adventure tales that Alistair is recounting, and the hunting is done during ‘gentlemen’s hours’ because the hunting party is often, it seems, hung-over from the previous night’s frivolities.

Alistair’s writing style is easy going and descriptive, especially when it comes to his food and mates, but the story in each pithy chapter is formulaic so you get that “have I read this one already” feeling. Slightly confusing are the use of elaborate nicknames, for example “Ash The Grey” and “Sammo The King Of Steinlager”.

There are colour photos smattered throughout the book which are best characterised as ‘home photo album’ material.

Overall, you get a sense that Alistair is passionate about his wild foods and cooking them and that is the primary theme that comes across in this book.

The Hunter’s recommendation is: buy it as a cook book but skip it as a hunting book

In the great tradition of NZ story telling meet a bloke who cooks a great feed, spins a great yarn and loves hunting and fishing. He is Alistair (Boycie) Boyce and he owns The Backbencher Gastropub across the road from Parliament in Wellington. Politicians love the place but they get no mercy from Boycie who has some of them featured on his wall as stunning puppet caricatures, looking over patrons enjoying his fine cuisine.
Follow Boycie as he gets into his hunting big time along with various mates like The Shadow, The King of Steinlager, The Welsh Marksman and many others. The stories portray his passion for the outdoors and are accentuated by Boycie’s wicked sense of humour as he learns the skills and tricks of the trade of the great outdoors.
This is not a book about big trophies and epic hunts; rather it is one man’s satirical journey into the world of hunting and fishing told with humour, humility and honesty and superbly complimented by his ‘Just Do It’ recipes that will make your mouth water.

The new chamois grip cap brings luck yet again.
More alpine views at Mt Cook. Glacier, peaks, and a few tahr in the space between, but not that many. Big and beautiful country.
Just spent a fun week here hunting the Alps with @nzdeerstalkersassociation crew.
First time I've seen this epic statue - monument to New Zealand’s tahr herd. Epic! I'm here with the @nzdeerstalkersassociation
The first big use and test of my day pack and it passed. The expanded meat shelf fits a full body cape of a tahr. Heavy and durable but reliable and very functional, just like my faithful rifle setup.
Epic mane on the bull tahr for early rut so decided to do a full body cape.
Help with tahr management by downloading the new App by the team at the NZ Tahr Foundation. I've been lucky to work personally with them over the past few years and the data will be used for the benefit of the hunting sector and tahr hunters. I'll be using it this rut and on my tahr hunts.
One sensational bull tahr. 14 7/8 inches long. An old bull.
Spectre while glassing for tahr in the clag. Had a great few days in the alpine.
My rut hunting adventures begin ex Wellington for Christchurch for a week bull tahr hunting in the Alps with my old man and brother. These new transport rules require overriding 20 years of habits - not easy to shake. The weather looks sensational.
Tahr and chamois hunting in the alpine during the rut is the ultimate hunting experience for me. Tests your gear and your resilience to the max. Delivers maximum enjoyment too.
Last year's tahr ballot bull of mine overseen by my hunting mate @elli0t.riley who's now a fully accredited alpine hunter convert. I can't believe it's a year ago and I'm now preparing again for my ballot in May! What to pack? Planning is half the fun.