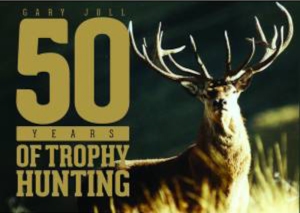 I was immediately impressed upon picking up Gary Joll’s latest book and thumbing through its pages. Written by one of New Zealand’s most accomplished professional hunting guides, 50 Years of Trophy Hunting is about Gary’s personal hunting successes in New Zealand and around the world.

Divided into sections based on country – New Zealand, Australia, New Caledonia, United States (including Alaska), South Africa and Zimbabwe – these sections have chapters covering a memorable hunt for a single game species, with the story reliving the ‘best’ or most memorable ‘trophy’ taken of that species.

The footnotes and comments at the end of each hunt, where Gary reflects on lessons he’s learned, were very interesting and insightful, offering a glimpse into the psyche of a hunting guide.

Novice and experienced tahr hunters take heed, Chapter 2: Hunting Trophy Tahr provides one of the best summaries on identifying trophy-class bull tahr you will read, offering keen observations by someone who has assessed thousands of heads.

Gary’s style of writing is casual, factual and filled with Kiwi hunting colloquialisms, but sometimes lacking in detail which would have really allowed the reader to imagine the hunting scene (however this can be excused due to the breadth of the book as it would become unwieldy if he was too descriptive). One niggle is the odd tangential thought dotted throughout that gets in the way of a good story, and the prevailing sense Gary doesn’t like the direction that big game hunting is going in New Zealand.

It is a great book for aspiring international big game hunters who may have an interest in overseas guided hunts because it details his time hunting plains game in Africa, North American big game in Alaska and the Lower Forty-Eight, and various hunting excursions around the South Pacific.

This is a book suitable for any coffee table as each chapter can be read as a standalone. Pictures are plentiful and I found myself flicking through the many colour photos again and again.

If I had one wish it would be for more photos of Gary’s trophy room and each individual animal.

If you were to walk into the author’s trophy room and silently start counting the mounted hunting trophies you would reach a figure of forty-five animals on display. This book – the author’s fourth – is simply the story of the hunt for each trophy now hanging on the walls of his trophy room, each trophy a continuing memory of so many special and sometimes remarkable days of hunting.
It was while hunting in Alaska, away back in 1963, that Gary became a confirmed trophy hunter. In the pocket of his hunting jacket were permits issued by the Alaskan Department of Fish and Game that allowed him one moose, one caribou, one grizzly bear, one black bear, one Dall ram. Before squeezing the trigger on a prospective trophy Gary had to determine that indeed the animal he had in his crosshairs was a fine aged male, for after making a mistake in selection there was no second-chance permit. Long before departing on his once-in-a-lifetime trophy hunt in Alaska Gary read extensively, teaching himself what was internationally considered a trophy of a given species.
His “Alaskan Experience” carried over into his hunting for all future hunts, always seeking the outstanding aged male. And, once a species had been secured the author seldom sought to better a trophy in hand, but instead sought different species in different places, different countries, his trophy hunting being his personal Permit to Travel, often with his wife Sue accompanying him.
Gary’s dedication to serious trophy hunting carried over into his professional hunting guiding career where daily he sought for his client only the very best to be found. Testimony of this dedication to quality is to be seen in Issue VI Volume 2 of the SCI Record Book of Trophy Animals where nineteen of the Top Twenty-five bull Tahr and sixteen of the Red stag were guided by Gary.
Today the author unequivocally supports the formation of the recently established Game Animal Council and fervently hopes that within his lifetime the day will arrive in New Zealand where the average hunter will hunt for trophies not for tally.

On the way to adventure.
Walking the Dolomites a few years ago on a cold and windy day and seeing views like this was pretty amazing.
Write a story and the editor, Simon Gibson, decides to put you on the cover of the Spring issue #218. Thanks @nzdeerstalkersassociation I'm thankful and privileged. I need a camo upgrade... or maybe not, as it seems to work well.
Not much to eat in the alpine zone. Seems like chamois and tahr eat rocks. Nice views however.
First use of my new tent which has replaced my Kea destroyed one. I really like the color of these Hubba Hubbas. Nice spot to camp too.
The 7mm Rem Mag R8 on alert for chamois.
Just been hunting for a week in the easy country found in remote parts of Nelson Lakes National Park with some NZDA women hunters. It was epic.
So I'm running these Nevada out of the box from Crispi after being a convert at the Sika Show. They say no breaking in required. I'll let you know after a week on the tops. She'll be right. Trust the sales guy!
Packing in a hurry this morning after the Sika Show, so it's all a bit messy! I used my trusty list to take the thought out of it. I'm off with some @nzdeerstalkersassociation folks and Josh from @thehuntersjournal to do a red deer management hunt in Nelson Lakes National Park. Weather is a bit stormy. We might find a good chamois buck if we're lucky.
Proud to represent and work for grassroot hunters, like those in NZDA's team at the Sika Show, who volunteer, educate and advocate. These members are the lifeblood of our sport in New Zealand. Join NZDA and become part of the community because together we are stronger.
I'm at the Sika Show with the other NGOs but representing NZDA and NZ's recreational hunters and shooters. Drop by and say hello as I'm keen for a chat and any feedback. I stopped by the folks at the Tahr Foundation stand, as I'm a supporter and passionate alpine hunter.
NZ Falcon in the high country.